What is Excel V Laser?

Excel V laser is a high-power laser with targeted pulses to repair vascular skin conditions (related to blood vessels) such as Rosacea, spider veins, pigmented lesions such as sun spots and age spots, as well as acne scars, fine lines and enlarged pores.

Featuring two wavelengths of lasers, this customisable ability allows it to simultaneously treat different skin conditions from vascular conditions to benign pigmented lesions, as well as to lift, brighten and overall skin rejuvenation and radiance. 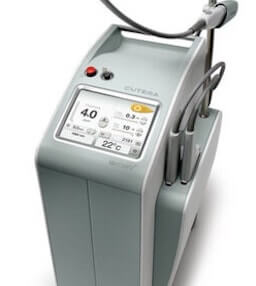 How does Excel V work? 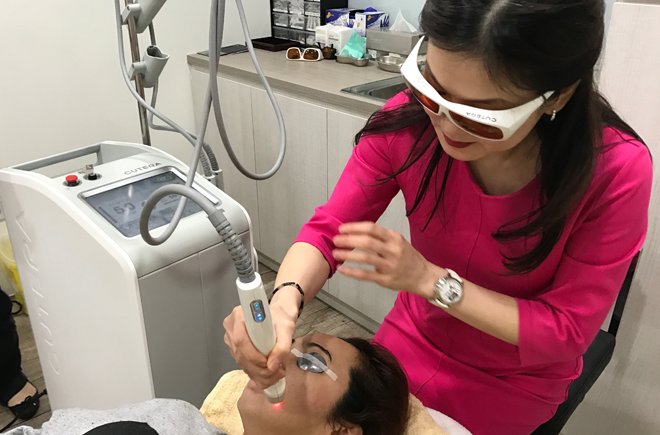 Excel V transmits a high power green laser energy that is absorbed by the target abnormal blood vessels in the skin. This thermal energy heats up the abnormal vessels causing the vein walls to disintegrate, and the treated vessel diminish over time.

The short pulses from the 532 nm wavelength target superficial vascular lesions, such as rosacea, diffuse redness, and spider veins.

What can Excel V treat?

Facial Telangiectasia
These are dilated blood vessels that range between .1 to 1.0 mm in diameter. These are often small capillaries in the skin of the face. They are most commonly seen on the face around the nose, on the cheeks and on the chin. They are a cosmetic concern for many people and easily treated with the Excel V laser.

Rosacea
Rosacea is a chronic skin condition that often presents as facial redness. It is characterized by facial redness in the area of the cheeks, nose and forehead. It can also affect other areas of the head, neck and body. The redness is caused by small dilated blood vessels that are difficult to see individually with the human eye. Occasionally, larger dilated blood vessels are noticeable. The Excel V is one of the best laser treatments for Rosacea.

Venous Lakes
Venous lakes are large dilated veins that can be up to 1 cm in size. They are commonly seen on the lips but can also be seen on the face and on the ears. Laser treatment with Excel V for venous lakes is highly effective with most people only needing one treatment.

Cherry Angiomas
Cherry angiomas are small red papules (raised dots) on the surface of the skin. They are usually 1-3 mm in diameter. They start small and can grow in size with time. Cherry angiomas can be located anywhere on the body and usually form in the middle ages and beyond. They commonly proliferate and are present all over the body. Laser treatment for cherry angiomas is the mainstay of therapy.

Also known as nevus flammeus, port wine stains are birthmarks that are vascular in origin. They range in colour from a light pink to a dark purple. They can occur anywhere on the body but are most common on the face.

Facial Redness
There are many causes of facial redness and this is commonly related to Rosacea. Excel V is an excellent laser treatment for facial redness.

Poikiloderma
Poikiloderma is characterized by red and brown pigmentation of the neck skin and chest skin. It is often a result of sun exposure and sun damage. Laser treatment for Poikiloderma can take several treatment sessions.

Leg Veins
Leg Veins are a result of dilated blood vessels in the legs and range in size from varicose veins to smaller telangiectasias that are also known as spider veins. These dilated blood vessels are seen in the lower extremities because of dependent flow abnormalities. It is much more commonly seen in woman than in men. Smaller leg veins are treated with the Excel V laser. These generally take several sessions and results in significant improvement in the appearance of the legs.

Scars
Scars are generally noticeable when they have a different colouration from the skin of the surrounding areas. Scars are often redder compared to the surrounding skin. The Excel V is specifically helpful for these red scars. The Excel V laser is of the best lasers for red scars and helps diminish the noticeability of them.

Bruising
One added bonus of the Excel V laser is that it helps reduce the appearance of bruising and helps your body get rid of bruising faster than it normally would. Our doctors often use the Excel V laser after surgical procedures in order to minimize downtime for their patients. Results can be seen immediately and bruises can be gone as soon as the next day after Excel V laser treatment for bruising.

It is also excellent for providing overall skin rejuvenation and smoothing rough skin texture and pores.

What to expect during the procedure?

Unlike other procedures, injections or topical anesthesia are not required throughout the duration of the 15 – 30-minute procedure. Excel V gives a continuous cooling effect before, during and after each pulse for maximal comfort and safety.

How many sessions are needed?

The number of treatments varies amongst patients and it depends on various parameters, including the size, thickness and color of the vascular lesion. Superficial vascular lesions are usually easiest to treat; some patients might see significant improvement after just one treatment.

Is there any downtime?

You can resume daily activities immediately after the laser.  Some patients may only experience mild pinkish flush on the skin which eases within a few hours.

It’s time to own your beautiful.